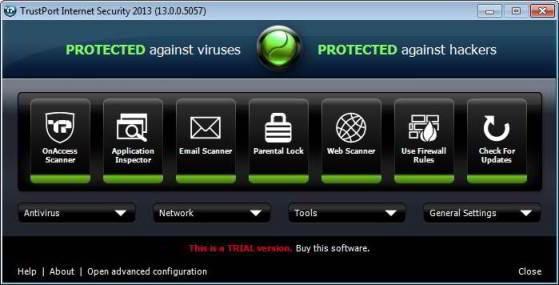 TrustPort is a name which all know because of their multiple antivirus engine integrated into one. These multi-engine antivirus always tops in ranking but users complaint of slow computers. Same as with Norton or McAfee.  People think antivirus speed is everything but actually it depends on file checking and engine speed. Multiple engines may mean more time as I tested with anti-viruses.

TrustPort TotalProtection 2012 is different here. I installed it and ran benchmarks and tests. Its good for a 2 GB RAM system with minimum of Celeron M processor. Moreover the UI is neat and clean. If you are aware that paid antiviruses are always better and want to leave those free useless craps then this is the thing you can try for 1 year just by playing a game.

It has following features:

These all looks costly but right now under promotion 1 Year licence is free from TrustPort. $49.95 Licence free of cost for playing a game and also a Draw for XBOX.

I played it and got it. You have to log in using Facebook and break the transmission code between aliens by clicking alphabets. Just that. 1 Code per level. 1 Level to get licence for 1 year and 5 for draw in XBOX.

I am posting Decrypted codes which you may use. There are many but these are most likely to appear. Remember they appear random and can be little modified. They are funny. Get your 1 year free now.

WE MUST INFECT ALL TRUSTPORT PRODUCTS WHICH SECURE COMPUTERS FROM VIRUSES AND OTHER MALICIOUS SOFTWARE!

WE MUST SUCCEED IN HACKING ALL TRUSTPORT PRODUCTS SO THAT ALL THEIR USERS BECOME INFECTED WITH VIRUSES. WE WILL MAKE TRUSTPORT SOFTWARE DIFFICULT TO USE. IF ANYBODY NEEDS TO SET TRUSTPORT PRODUCTS ACCORDING TO THEIR DEMANDS, WE WILL HAVE TO BE A PC EXPERT.

WE HAVE TO HIDE THAT TRUSTPORT HAS WON AWARDS IN PRESTIGIOUS BENCHMARKING TESTS. WE WILL MAKE THIS SCANNING TECHNOLOGY BELONG TO THE WORST IN THE WORLD.

NO MATTER HOW GOOD TRUSTPORT THINK THEY ARE. WE WILL STILL FIND A WAY TO INFECT AS MANY USERS AS POSSIBLE. THIER DETECTION COULDNT BE SO FLAWLESS. WE HAVE TO FIND A WAY AROUND TRUSTPORTS TRANSFERABLE VERSION OF ANTIVIRUSS WHICH PROTECTS USB FLASH DRIVES AS WE WANT TO SPREAD VIRUSES THROUGH THEM!

WE MUST SUPPRESS INFORMATION THAT TRUSTPORT PRODUCTS HAVE THIRTEEN ..forgot..this..one.. OF UNWANTED WEBSITES WHICH ARE POSSIBLE TO BLOCK USING PARENTAL LOCK AS WE WANT TO SPREAD AS MANY VIRUSES AS POSSIBLE.

Hey, where are my Chrome extensions for tweaks?

Help us reach out to awesome people lie you out there. We publish Tech and WordPress, Deals, and Reviews. WE DON'T SPAM!

Your Information will never be shared with any third party
Powered by Ninja Popups
We use cookies to improve your experience using our website as all other sites do. This involves logging basic Unidentifiable data. All Details