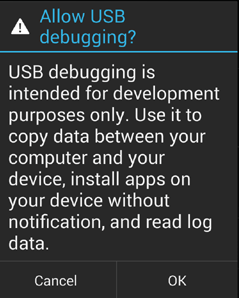 So, I received the notification that Android 4.4.4 is available for Moto G. In India? Wow… That is fast. But, no… it is not available for everyone. It is actually a SOAK test for the people who participated in Motorola Survey to help developer. Randomly some IMEI were selected and update was pushed. So, people… Chill there is nothing wrong with your phone. It’s just a developer preview and may contain bugs.

Now, for this update to complete your phone must not be rooted, unlocked, any files modded, replaced even not frozen. All of these checks are done by this new firmware. If you did any single thing from above then the update will fail. Mostly with message “error” and a dead android. So, your only option is to unroot, relock bootloader and return to Stock 4.4.2 KitKat. Let’s start,

First of all, install Moto G USB drivers and connect your phone. I prefer all driver installations beforehand so that nothing pops-up in mid of flashing process. Make sure you also complete ADB flash driver installation by rebooting phone in Flash (mfastboot mode).

Enter the Developer options and Turn it on. Then scroll to USB Debugging and select it. You will receive a warning, which is ok.

To put Moto G in Flash mode: Switch off phone. Then hold Power and Down button together for 3-5 seconds and release both. You will land in Fastboot mode (Flash). Your system will recognize new device and install more drivers.

Switch off the phone and enter the Fastboot as explained above. Connect your data cable to phone and PC. The Fastboot mode will recognize it and will announce that the phone is now connected and is being charged.

Select option Run from Start Menu and type ‘cmd’ and press enter to get to MS-DOS mode. There are other ways also. Anyone of those is fine.

From command prompt, navigate to folder where you extracted all above files. You can use ‘cd’ command to change folders. Just find out the device connected and everything is working. Pass below command at command prompt and press enter,

Note: You may be asked to confirm the PC USB Debugging request by phone as shown, answer with ‘Always Allow’.

Now, supposing that you are in correct folder location at command prompt, run these commands one by one in same order as given,

After the OEM lock command phone will show that it is locked. Sometimes, you may not be able to pass-on the next reboot command as the phone will not respond and hang on ‘Locked’ message. So, just restart the phone by holding power button for 6-7 seconds and start it again. Nothing to worry.

Your phone may show original ‘Booloader Unlocked’ start-up animation as it was there when you first unlocked the bootloader. There is nothing to worry. This is just some bug (or you patched the screen last time) and your phone is relocked.

Now, if you have also received the KitKat 4.4.4 Update notification for Moto G, you can move ahead with update.

How to Link Aadhaar with Vodafone Number via Call

Help us reach out to awesome people lie you out there. We publish Tech and WordPress, Deals, and Reviews. WE DON'T SPAM!

Your Information will never be shared with any third party
Powered by Ninja Popups
We use cookies to improve your experience using our website as all other sites do. This involves logging basic Unidentifiable data. All Details